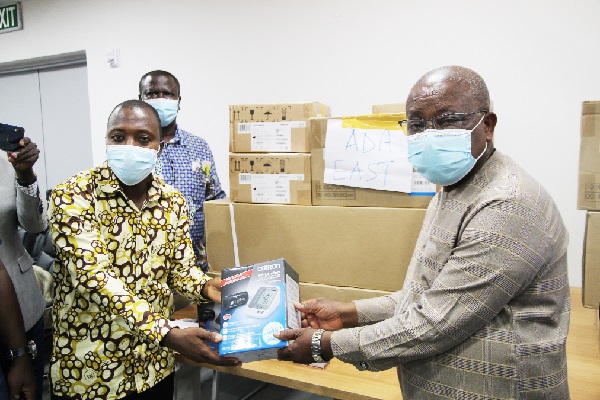 The Ghana Heart Initiative (GHI), a project being implemented by the German International Agency(GIZ), has donated medical equipment worth €200,000 to 44 hospitals in the Greater Accra Region towards treatment of cardiovascular diseases (CVDs).

The equipment include defibrillators, patient monitors, weighing scales with height meter and glucometers.

The GHI donation was financed by Bayer AG, a German multinational pharmaceutical and life sciences company that has special interest in CVDs.

Presenting the medical equipment to the representatives of the 44 hospitals at a ceremony, the Director for GIZ Ghana, Mrs Regina Bauerochse Barbosa, said the equipment were to help reduce the risk CVDs posed and enable patients receive quality treatment while also allowing health workers to deliver their services more efficiently.

“The GHI is supporting the critical work of diagnosing and managing cardiovascular diseases (CVDs) in Ghana,” she said.

She said in spite the fact that CVDs were on the increase and were also a leading cause of death in the country, managing the disease had not been as efficient as required and hence the GHI initiative to support the 44 selected hospitals so that they could become more efficient in the handling of the diseases.

She said even though early diagnosis and adequate management of the risk factors of CVDs could reduce the fatal consequences of the conditions, the standardised approaches for adequate risk assessment and management system were currently lacking in Ghana’s healthcare programmes.

Mrs Barbosa thus said the GHI’s overall goal was to improve risk assessment and management of the diseases in the beneficiary hospitals.

Delivering his keynote address, The Minister of Health, Mr Kwaku Agyemang Manu, said that CVDs were a growing public health concern in the country and in other African countries.

He said risk factors such as hypertension had made strokes and other CVDs leading causes of death .

He said although the CVDs were non-communicable, they affected the general populace, especially as they aged and had not received the much needed attention.

“Cardiovascular diseases affect the general populace, especially as one grows old and yet stakeholders have not paid the needed attention,” he said.

Mr Manu said that the fact that people with hypertension and CVDs fared badly when they contracted the COVID-19 had brought to the fore the urgent need to give great attention to CVDs.

The Ghana Heart Initiative is being implemented by the GIZ in partnership with the Ministry of Health (MOH), Ghana Health Service (GHS) and privately funded by Bayer AG.

The project aims at improving risk assessment and management of CVDs at the tertiary, secondary and primary levels of care in public health institutions in the country.

About the author: GSC

No other information about this author.